4 Reasons You Should Be Fishing for (and Eating) Blue Catfish 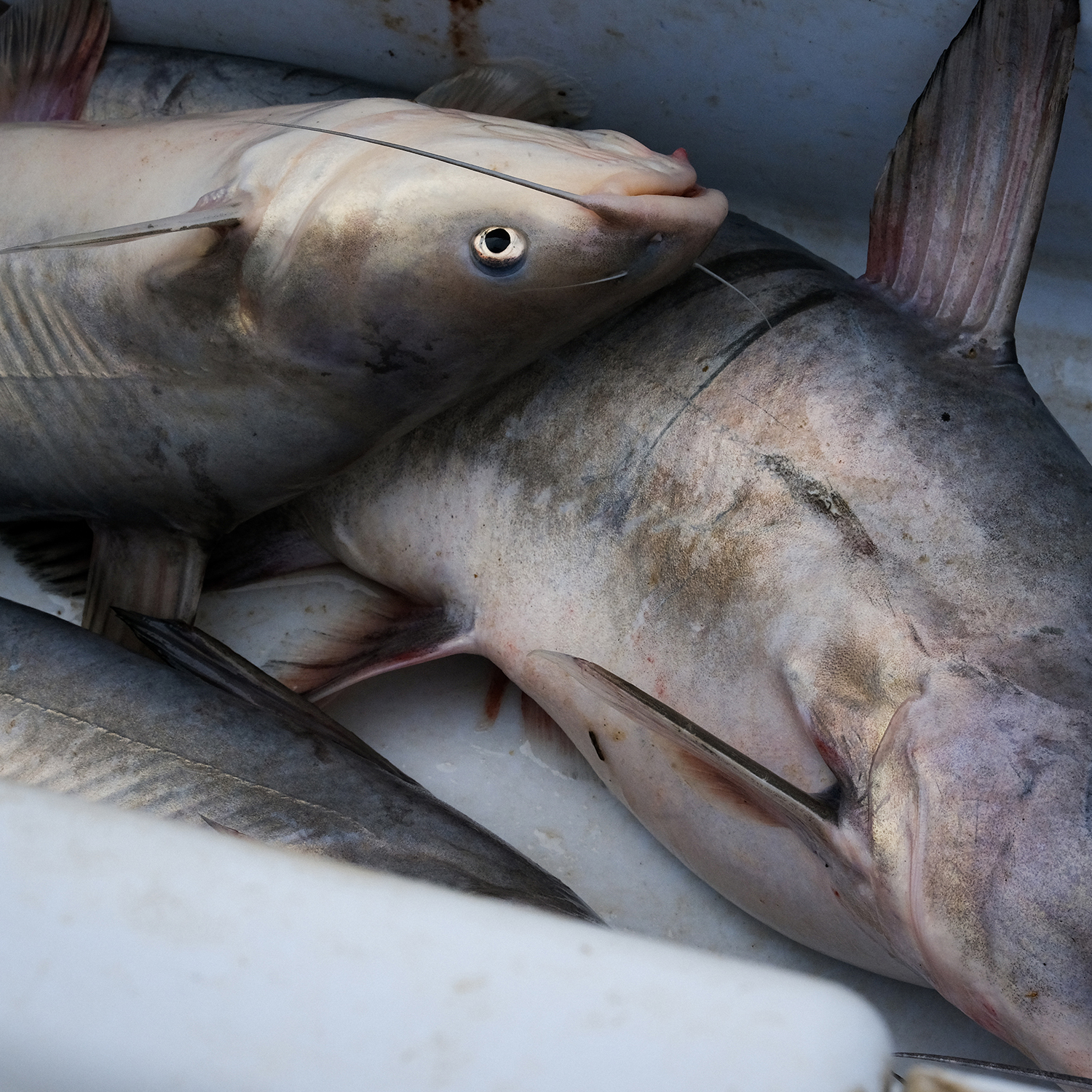 The more time I spend fishing and hunting, the more I begin to see my passions come together. For instance, I used to only fly fish. For about a decade, I wouldn’t even look at a spinning rod or bait caster. Then, I learned about hunting. Then, I started thinking more about eating wild foods.  Then, I began to eat more fish. I began to see things in a whole new light and stopped caring so much about my image in the outdoors—and more about being efficient in the outdoors.

Decades later, I still fly fish, but I’ve also spent the last few years pulling blue catfish off of a trotline—which is about as far as you can get away from fly fishing. Some might even call it redneck, but I don’t care. The point is, the way I see fishing, hunting, eating, and enjoying my time outdoors has convalesced into one big picture. A place for everything and everything in its place.

And that’s why I’m writing this article because I believe more people should be fishing for and eating blue catfish. Beyond being a prolific and delicious fish (which I’ll get to in a bit), it also represents a perspective that’s being lost in many sporting communities. We’re so obsessed with catch-and-release, coldwater species, that many of us have forgotten how rewarding it can be to pull a 20-pound catfish out of the water and fill the freezer with great meals. They can exist in the same universe. You can have your Filson hat and your tank-top/jorts combo (a catfishing requirement)—it doesn’t need to be a zero-sum game.

With that in mind, here are four reasons why you should be tracking down the mighty blue catfish.

Fishing is great and all, but if you’re looking to fill the freezer, hunting wins every time, unless you’re talking about blue catfish. If you live in the southern states, these fish are the big game of freshwater. Record-setting fish are in the 130- to 145-pound range—absolute monsters—but, 20- to 50-pound fish are not all that uncommon. These beauties are big and dwarf just about any other freshwater species, including other catfish, and can put most saltwater species to shame. So, if you’re into catching big fish, then you need to be catfishing.

Of course, that’s only half of the equation. I wouldn’t be all that interested in targeting blue catfish if they weren’t good to eat. Personally, I spent a good portion of my life thinking that you had to deep-fry anything that came out of a warm, freshwater area, to make it edible—and sometimes it’s true. But, it’s definitely not true for blue catfish. Trust me. Not only are they huge fish, but they’re also incredibly delicious, fried or otherwise.

I’ve eaten blue catfish as large as 25 pounds and they were just as delicious as what anglers call “eater” sizes, ranging from two to five pounds. And, better yet, you can get weeks’ worth of food off of one fish, meat that is great grilled, blackened, and yes, deep-fried. It’s mild, tender, but not mushy, and not “fishy” in the slightest. Just like most fish species, it’s probably best to let the big, old fish go, but as I said, 25 pounds isn’t really that big for blue catfish and you’ll catch plenty in the 8- to 15-pound range, with plenty of meat on the bone.

Combined with their size, blue catfish are also apex predators. In a way, you could compare them to wild pigs—they’re big, prolific, durable, and, in some cases, invasive and destructive. After being introduced to the Chesapeake bay system, they quickly went into high-salinity waters and started eating all kinds of fish and blue crabs, which isn’t great, so agencies like NOAA are convincing anglers to eat more of them.

But, outside of the eastern seaboard, blue catfish are doing just fine. They can handle a wide range of temperatures, eat just about anything in sight, and are extremely durable—hence their ability to grow to large sizes. In Texas, we’re allowed to keep 25 blue catfish a day. That’s not exactly a threatened species, so you don’t have to feel bad about throwing a few of them in the cooler.

This is a personal one for me, but it may apply to some others as well. I grew up fishing, throwing worms out for bluegill, bass, catfish, or whatever would bite. And then, I “grew up” and decided that I was too good for stuff like that, and needed to master the “finer art” of fly fishing. I put up my catfish rod and traded my childhood for a fly rod.

Just in the past few years, I’ve re-expanded my angling world. I still love to fly fish, but I realized that I also love to throw some pig livers on a hook to bring in a big ol’ blue cat. For too many anglers, those worlds don’t co-exist—you’re either a redneck catfisherman or a pretentious fly-fisher. For me, rediscovering catfishing was also rediscovering why I loved fishing in the first place—it’s a simple way to lose track of time, enjoy some more-than-decent table fare, and maybe catch a monster in the process.

My point is this: If you think you’re too sophisticated for catfish, then you’re missing out. I’d rather be “unsophisticated” and have a line in the water any day of the week. Plus, what else am I going to do with all of those pig livers?

Long story short, blue cats are great. They’re big, delicious, prolific, and represent the simpler side of our sport. And, if you’re looking to eat more sustainably, blue catfish is a great way to go. Much like eating feral pigs, you’re dipping your toes into an ecosystem that’s healthy (maybe too healthy) and will likely remain that way for the foreseeable future, which can’t be said about all fish species.

If you’re in the south or southeast, chances are there are plenty of blue catfish in a reservoir or river system near you. They love deep water, stinky baits, and anglers who have more than enough patience to wait for a strike; if you have that winning combination, you just entered a whole new realm of fishing opportunities.

Some Tips for Catching Blue Catfish

The Stinkier the Better: Baits of all kinds work well but in my experience, animal innards seem to do the trick nicely. I’ve used wild pig livers to rig lines, and they seem to love it, but chicken livers work as well, as do cut shad and menhaden.

Go Deep: Blue catfish love deeper water, particularly in the warmer months. You’ll want to be fishing in at least 10 feet of water if not 25 to 40 feet. During the winter, blue catfish will come shallower, cruising through the shallows near a drop-off or steep underwater ledge. Here’s a great article on winter catfishing.

Read the Weather: Oftentimes, blue catfish become very active after heavy rain, when debris and food sources are running into bodies of water and are suspended in the water column.

Find the Bait: Just like any other fish, blue catfish are motivated by their stomachs first and foremost, so if you can find schools of baitfish like shad, you’re in good shape. Fishfinders are incredibly helpful, but you can also do some research to learn more about their behavior.

Trot Line PSA: I mentioned trotlining at the beginning of this article. It’s a great way to fill the freezer, but it’s also a practice that can be easily misused. First, be sure it’s legal in your area, and make sure you’re clearly labeling your line. Next, you’ll want to remove fish as quickly as possible, so do your best to remain in the area or check the line frequently so fish aren’t suffering or dying on the line. Trotline responsibly.